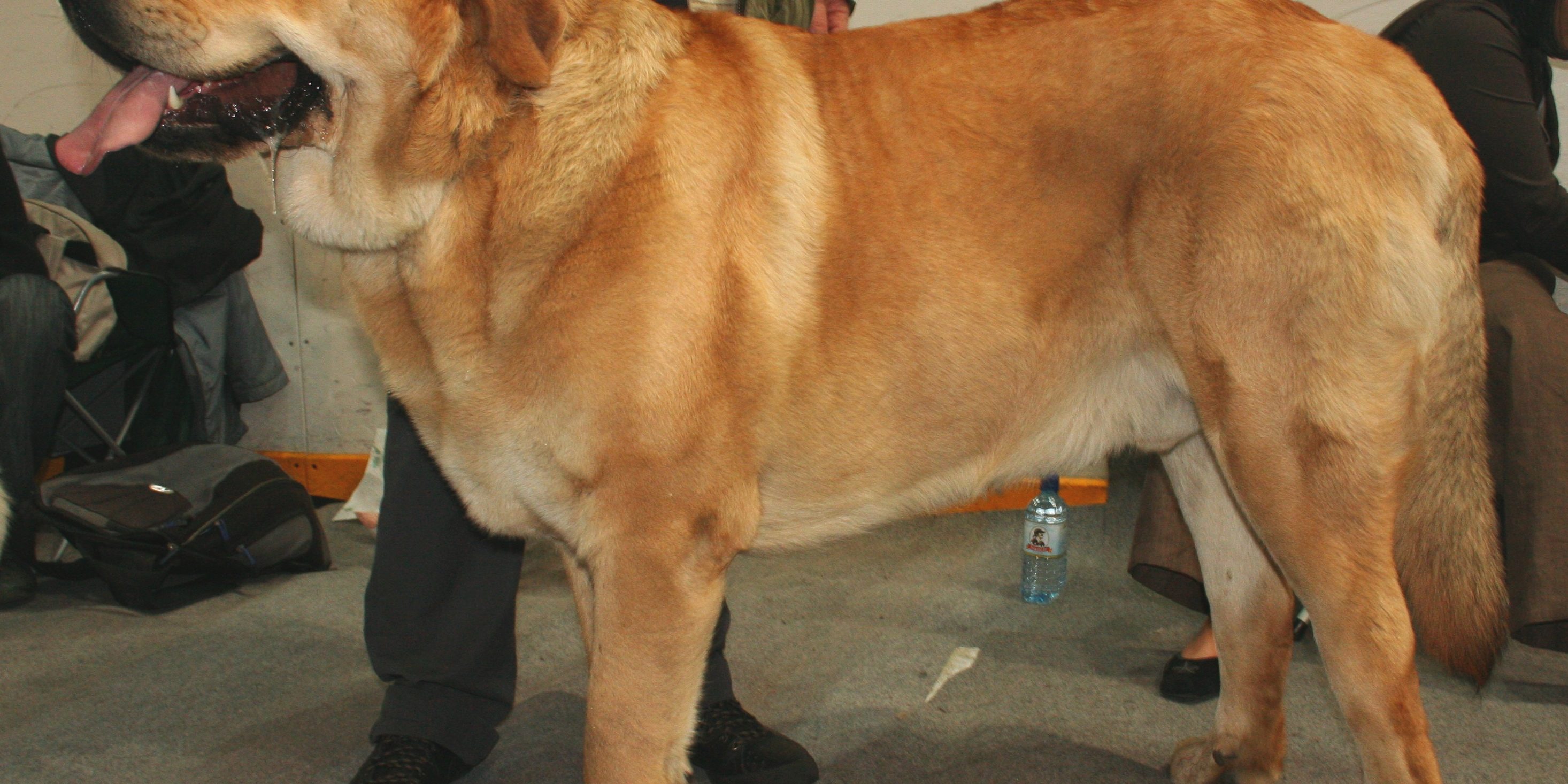 The Spanish Mastiff lived a good life. It was cherished by it’s owners and loved by all during the herding seasons. They saunter along side the herd as they move over the terrain. At the next site of a wolf they bellow out and give chase.

This dog’s breeding makes it a great guard dog for families. It’s certainly a great cattle dog. If you have enough space this could be a great dog for you. The two other common names of this breed are Mastín Español and Mastín de España. There are some things to consider before selecting this dog breed.

This Mastiff appeared over 2000 years ago. This dog existed on the Iberian Peninsula before the Romans invaded by Greeks and Phoenicians. Historians saw the first writings of this particular kind of Mastiff appeared in writings by a man named Virgil around 30 A.D. Another writer named Columella also mentioned the breed date from the first century.

In the 10th Century wool became a very important part of the spanish economy. This Mastiff benefited by guarding and herding sheep. The demand for these dogs increased. In the 12th century when breeding of a new sheep called merinos started. Sheep were driven to the South of Spain in the Winter, and the mountainous North of Spain in the rest of the year. At that time millions of sheep were being raised. For every 100 sheep there was on Mastiff to help tend to the herd.

Where did the Spanish Mastiff Come From?

The Spanish Mastiff have originated in the Spain in the regions of Asturias, Cantabria, Province of León and Province of Zamora. It was used to herd cattle between Northern and Southern Spain.

Spanish Mastiff was originally developed to be a cattle guard dog. They’re responsibilities were to guard the cattle from predators. These dogs were resilient to weather, independent, and very fierce when guarding cattle. Typically other dogs in the herd like Carea dogs typically helped herd the cattle. Together they made a great team.

Spanish Mastiffs at a Glance

The Spanish Mastiff is a very large dog! They’re bodies are longer than the dog is tall at the shoulders (withers). They have large, tall heads with a long sloped nose.

Their coats have medium thickness with thick loose skin to keep these dogs warm. Their coats thickness is consistent all over their bodies. These dogs are large and majestic! Another great characteristic of this dog is they can have a varying pattern of coloring:

The Spanish Mastiff is fairly easy to groom. They have one coat. They are large dogs and will produce more hair. A weekly brushing will keep these dogs looking good. During shedding season they may need more brushing. Also brush or bath when dirty. Giving them an occasional bath will keep them clean.

Check their nails to make sure they are not split or cracked and trim as needed.

Check their ears to make sure they are not full of debris or wax and clean as needed.

Best Climate for the Spanish Mastiff

Despite of their serious expression Spanish Mastiff is affectionate, intelligent and kind. This breed is loyal to their family and a wonderful protector. This breed can be aloof to stranger can be aggressive into other dogs and cats. However, if being train, proper socialization and had a supervised exposure since in their puppyhood, will reduce the tendency of aggression and they can be nice to stranger. Spanish Mastiff is alert and motivated but they can get bored easily, spend time with your dog and training must be consistent and firm.

The Spanish Mastiff has an independent personality. It’s a very smart dog breed. They often do what they please. This Mastiff can be trained but they take patience and consistency. They are very loyal to owners and families though and like to please!

Spanish Mastiffs are very territorial by nature. They are harder to socialize with other dogs and can be aggressive towards cats until they are familiar with them. They are better as solo pets or cattle dogs.

The Spanish Mastiff is a giant but calm dog. They are devoted to their family and nice to strangers, especially when trained and socialized. It can be aggressive toward other dogs when first meeting. This Mastiff still gets along well with animals they were raised with. This breed is gentle, affectionate, and can be great playmate with children. People should supervise the Spanish Mastiff when playing with small children to keep the dog from accidentally hurting or stepping on the child. This breed can easily adapt to lifestyle changes.

The Spanish Mastiff has a lower prey drive. They were bred to be herd guard dogs. They do not typically chase small animals like hunting or tracking dogs would.

The Spanish Mastiff does not have a great need to socialize. The breed is quite amicable around people and other animals but also adaptable at being alone for hours as well.

Is The Spanish Mastiff Good for New Owners?

The Spanish Mastiff is not advisable for a beginner dog owner. This breed has a stubborn personality need effective training to keep behavior issues in check like their protective instinct. They can also be stubborn and a consistent response is needed to keep them in check.

The majority of Spanish Mastiff are healthy dogs in general. Like other giant dogs, this breed may face some health challenges in their lives like musculoskeletal issues that large dogs have. They have a few breed specific issues like the ones listed below.

How Long Does The Spanish Mastiff Live?

Spanish Mastiffs live typically from 10 to 12 years if well cared for.

Spanish Mastiffs are healthy but they have health issues like

Spanish Mastiff require some exercise for physical and mental health. Either playing in the backyard or a daily walking will keep these dogs healthy. As cattle protection dogs they get much needed exercise. To train your dog in agility and obedience can also be a good exercise.

A Spanish Mastiff puppy is definitely cute! They grow very quickly and can be clumsy as they learn how to use their constantly growing legs!

These dogs grow very fast. At 6 months old the males can weigh more than 100 lbs or 50 kgs!

At a year of age they can weigh just under 200 lbs or 90 kgs! Check out the following growth chart. In the first year of these dogs life they grow a huge amount!