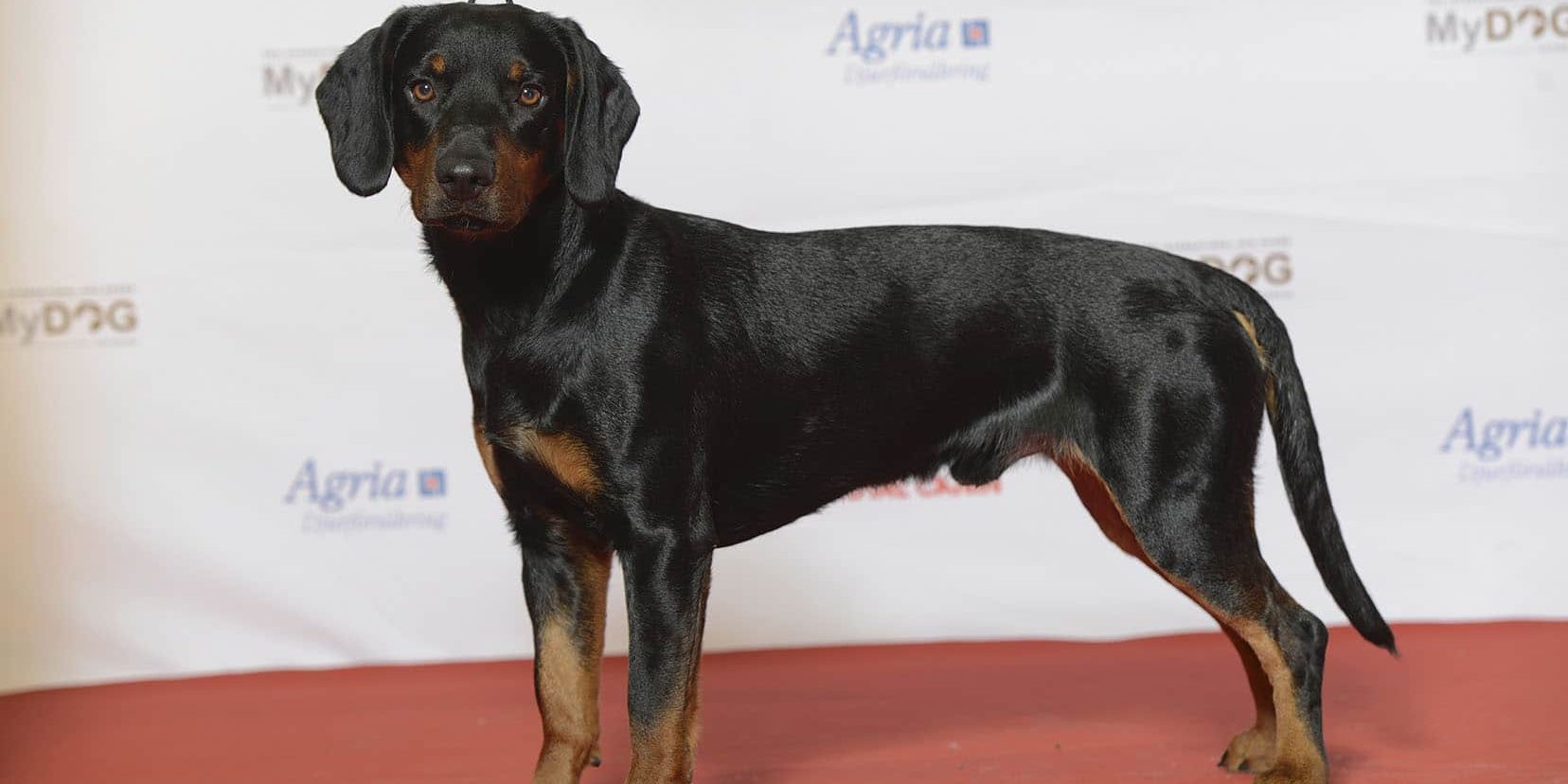 The Slovenský Kopov scenthound uses it’s short and slime stature to track it’s prey through brush and forest alike. As it picks up the scent of deer it belows out to it’s fellow Slovakian hunter following close behind. It’s only a matter of time before they find the prey and the hunt is over!

Despite being bred as a hunter this dog also does a great as a famliy dog! It might be hard to find however. With most pure breds being bought for hunting coupled with the fact that this dog is mostly only available in Slovakia, you will need to get in line.

The Slovenský Kopov is also known as the Slovakian Hound. It’s a fairly old breed and has been around in central Europe for many hundreds of years. Historians wrote about this dog as early as the 17th century. In the 17th and 18th century it was illegal to cross this breed with other dogs. This helped keep the breed pure. Breeders created this dog from breeds like the Brandlbracke (Austrian Black and Tan Hound), Chart Polski, and Magyar Agar (Hungarian Greyhound).

Starting in 1915 breeders created an approach to refining the breed. During this time colors and size started to become standardized. Starting in 1936 more strict breeding was done to breed out the undesirable colors and height. The FCI accepted this breed in 1963. By this time the genotype was solidified. Breeders established the Slovak Hound Breeders Club in Bratislava, Solvakia in 1988.

Where did the Slovenský Kopov Come From?

This type of breed originated in Slovakia and is thought to have come into existence sometime during the Dark Ages. This is a popular dog locally but is only now becoming known to the rest of the world.

The Slovenský Kopov makes a good watchdog, as they are continually alert and observant. They are also a hunting dogs used for hunting boars and deer. and he is known to its scenting ability.

This dog is a scent hound and does a great job hunting and tracking prey. Hunters created this dog originally to hunt and track prey due to their amazing nose and abilities to track scents.

Slovenský Kopovs at a Glance

This is a medium sized breed that was bred to be shorter to allow for tracking of deer and boar. This dog is also longer and slender. As with most hounds this dog has large ears that hang down. This dog has a longer nose with large nostrils to let it smell better!

This dog has a sleek block coat with tan markings that can appear on the face, chest, and limbs.

The Slovenský Kopov is fairly easy to groom. They have one coat. The occasional brushing will keep these dogs looking good. During shedding season they may need more brushing. Also brush or bath when dirty. Giving them an occasional bath will keep them clean.

Best Climate for the Slovensky Kopov

This type of dog can tolerate heat and cold.

The Slovenský Kopov is a great hunting dog. They are very devoted and loyal to their owners. They can also be great guard dogs because they are protective and have a good sense of hearing. This dog breed is fairly active and can cause trouble if not properly exercised.

The Slovenský Kopov is known to be a quick and adaptable learner when it comes to hunting. This dog was bred to specifically for hunting however and may not be the best dog if you are wanting a dog breed that can fetch frisbees. These dogs can be easily trained for social behaviors.

There are other breeds that do well with pets. This dog is specifically a hunting breed and might not adapt well to all other smaller pets. Like most breeds however they adapt better when raised around other pets from a young age.

The Slovenský Kopov is a sociable breed that does well with children. It can be a good guardian and family pet.

Because this dog is a hunting dog, it’s prey drive can be fairly strong. Keep this dog leashed when in public until they are well trained.

Is The Slovensky Kopov Good for New Owners?

This dog can be good for new owners. If you are a hunter these dogs would be excellent. For new owners that are not hunters there are some other breeds that might be bred more towards companionship.

The Slovenský Kopov is a hardy dog, and their are not many reported health issues. If kept healthy and active this dog can also live a long life!

The Slovenský Kopov has a lifespan of 12-14 years

This breed may experience ear infection due to floppy ears. their ear canals tend to become moist and humid, which leads to the proliferation of yeast and bacteria.

Wound and Injuries due to outside activities like hunting and playing eventually can lead to Hip and elbow dysplasia.

This breed requires at least one hour of moderate to vigorous exercise per day and will also appreciate having a fenced yard in which to run.