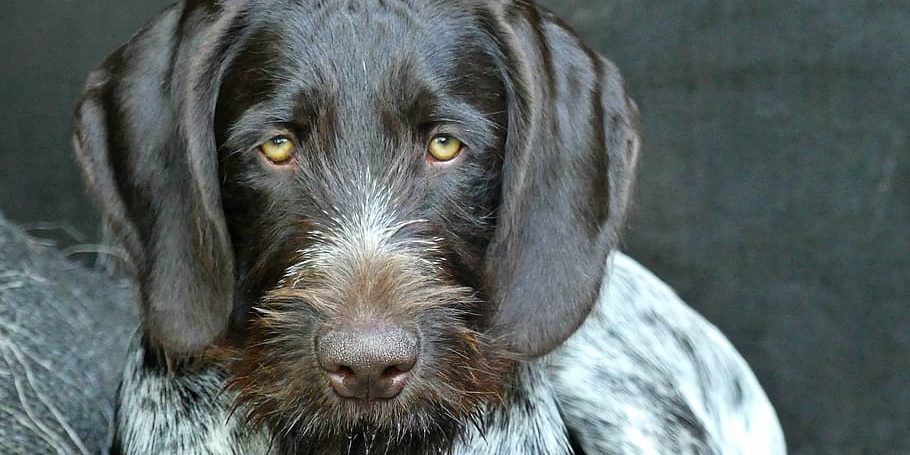 Some of these dogs have rougher, longer hair and are referred to as Slovak Rough-haired Pointers.

This breed has a nobleness in it’s lines and has moderate strength. The Slovak Rough-haired Pointer is a larger dog

Their coat is short to medium length and a shade between a tweedy gray-brown. This breed is able to work on the plains, in the woods, and in water. If it’s hunting it loves to search and retrieve. This Pointer is obedient and easy to train. They are affectionate and sincerely loyal to it’s handlers. This breed enjoys quality time and forming a strong bond to their owner.

Where did the Slovakian Wirehaired Pointer Come From?

The Slovak Rough Haired Pointer originates from Slovakia and is relatively new breed by Koloman Slimak. The FCI accepted the Slovak Rough Haired Pointer in 1985 and categorized it as a Continental Pointing Dog. In 1977, this breed was first introduced in the United Kingdom and recognized in North American, North American Versatile Hunting Dog Association, and the Malaysian Kennel Association.

Breeders developed the Slovak Rough Haired Pointer to be a hunting dog. The creator of this breed wanted a dog with a great stamina that can track, point, and retrieve in water or land. The creator wanted to have a working dog with a great stamina to hunt, point, and retrieve. He wanted to have a dog that is suitable to capture prey from birds and other small animals to deer.

Slovakian Wirehaired Pointers at a Glance

This Pointer has a rustic appearance with regular shape, strong legs, and a deep muzzle. It has large pendant ears. FCI developed the standard for this breed. The eyes of young Slovak Pointers may be “azure” or amber when adults. The Nose and eyelids are dark. Slovak Wirehaired Pointer has an intelligent and alert expression. The chest and Feet are white. The coat has both lighter and darker shades to the point of speckling.

These dogs in general don’t shed a lot except during shedding season. During these seasons brush regularly until the are done shedding. Brushing is not needed as frequently during off seasons. Trim the toenails as needed (about once a month) and inspect their ears periodically for wax, debris, or irritation.

These dogs prefer minimal to warm weather conditions. They do not have a thick enough coat to live in frigid climats.

Slovakian Wirehaired Pointer is lively, happy, and eager to please. This breed a high energy, smart and they will easily get bored. Sometimes training can be difficult to this breed and handlers must consistent in training session, make it fun and too long. This breed needs to have solid discipline with boundaries. Harsh words must be avoided and physical punishment. Slovakian Wirehaired Pointer is a hunting dogs and enjoyed hunting training but they don’t respond if they have choke collars.

Slovakian Rough-haired Pointers are typically calm and friendly with other pets. However, this breed is protective of their territory and it would be better if training and proper socialization will starts at an early age.

Slovakian Wirehaired Pointers are perfect for family dog for families with a lot of space. They are big and energetic. This breed is affectionate and generally loves playing with children. Supervision is needed for small children. Slovakian Rough Haired Pointer wants an active lifestyle, preferably in a rural environment.

They have a high instinct of chasing and catching something. They can easily catch cats, squirrels, or any other small animals. It’s their natural ability and doesn’t mean that they aggressive.

Is The Slovakian Wirehaired Pointer Good for New Owners?

The Slovakian Rough-haired Pointers are very attentive to their owners and are great for someone that is very active. However they take a lot of attention and might not always be the best for new owners.

Slovakian Wirehaired Pointers are generally a healthy breed. Responsible breeders screen their breeding stock for health conditions such as elbow and hip dysplasia, progressive retinal atrophy and cataracts. These dogs should not be exercised too hard or too long at a young age to prevent hip problems.

They can live 12 to 15 years which is longer than average for dogs!

Slovakian Wirehaired Pointer is a generally healthy breed but their are certain health issues may occur as they grow old. You should check with your vet regularly for hip and eye issues. Some common issues to this breed are:

Slovakian Wirehaired Pointers need constant exercise. This breed is a great companion to hike, bicycle and to jog. This breed loves to run freely. Keep them leashed while exercising to keep them from chasing other animals.