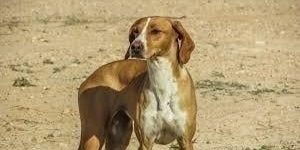 Owners know the Segugio Italiano breed for its responsive, intelligent, and calm demeanor. This breed is an ancient breed which traces its origin in Italy. The Segugio Italiano is a large dog which can weight 40-60 pounds upon reaching adulthood.

This breed socializes with people which makes it ideal as a family pet in some cases and is known for being good with strangers. People consider this breed healthy.

Breeders know this breed as an ancient Italian scenthound known by scholars through surviving literary documentation of the breed. Aside from the information that this breed appeared in Italy, their is a few background information regarding the breed’s genealogy which survived making most of its history shrouded in mystery and speculation by breeders and historians.

Where did the Segugio Italiano Come From?

The Segugio Italiano is pretty well-known in Italy where the breed is known to have originated. Up until now they were commonly found in Italian farmlands where they assist in controlling the rabbit population.

Breeders specifically chose these dogs due to their temperament and versatility when it comes to hunting prey. This dog was also displayed in a painting at Borso d’Este castle which dates back to the 1600s.

Italian farmers created this dog for pest control of rabbit populations as well as for hunting rabbits. The earliest known sources of this dog go back as far as a thousand years. This dog was used to hunting in packs with other dogs as large as 100 dogs!

Segugio Italianos at a Glance

This breed has a square-shaped body with their height equal to their body length, it is generally an athletic breed having an abdomen that is flat but not cram with a deep chest. They also possess their characteristic red coat and long floppy ears.

Their are 3 types of segugio italiano dogs:

Both the Shorthaired and Wirehaired fawn have brown-red coats. The WIre heard black and tan has a dark brown coat with light brown feet and light brown coloration on its jaw, chest and belly.

The Segugio Italiano has two coat types. Make sure to brush them weekly to make sure debris does not get stuck in either coat. These dogs also have a unique characteristic of long ears. Because of this their ears should be checked and cleaned regularly. Keep them dry to prevent ear infection. Bath when they are dirty but regular baths are not needed.

Make sure to trim nails regularly to prevent nail cracking or breaking. Also don’t forget to keep your dog up on vaccines to keep them immune to diseases.

Yes – These dogs do tend to drool a little more than other dogs as most hounds do. They do not drool excessively but if it bothers you a lot then try finding a dog that does not drool.

Best Climate for the Segugio Italiano

Preferably average to warm weather conditions. They can tolerate a lot of different climates but they are not good for extreme cold due to their short haired coat.

As a hunting dog, this breed is quite aggressive but still, they were kind, gentle in nature that can adapt to be a family pet. This breed is quite unconventional and not clingy but still, needs a companion in their side at all times. They are also an exceptional watchdog, that will bark if they hear something different.

Segugio Italiano can be difficult to train due to their headstrong attitude. As long as you are consistent, patient, and willing to spend time with these dogs they can be trained into great hunting dogs! Here is a video of a hunter with these dogs.

This type of breed usually doesn’t want to be with other animals or other pets.

This breed will be considered as a family pet. This Scenthound Italiano loves to be with others and a kid-friendly pet.

Segugio Italianos have a very high prey drive because of their breeding. Cats or any other small pets are at risk.

This dog is very friendly and sociable with people. Segugio Italiano doesn’t tolerate being left alone. They prefer to have a companion at all times and would not do well to be left alone all day.

Is The Segugio Italiano Good for New Owners?

Segugio Italianos are good for novice owners, due to their easy-going personality.

Segugio Italiano is known as very healthy breed and known as no health defect. This breed is not immune to illnesses so make sure to get them vaccinated as needed.

This dog lives 11-13 years which is a little more than the average dog.

This breed is healthy, most of illness are due to normal aging when well cared for. If you feel something is wrong visit your veterinarian. Work with your vet to monitor their health to address any issues.

Segugio Italianos has a low energy level compared to other breeds.