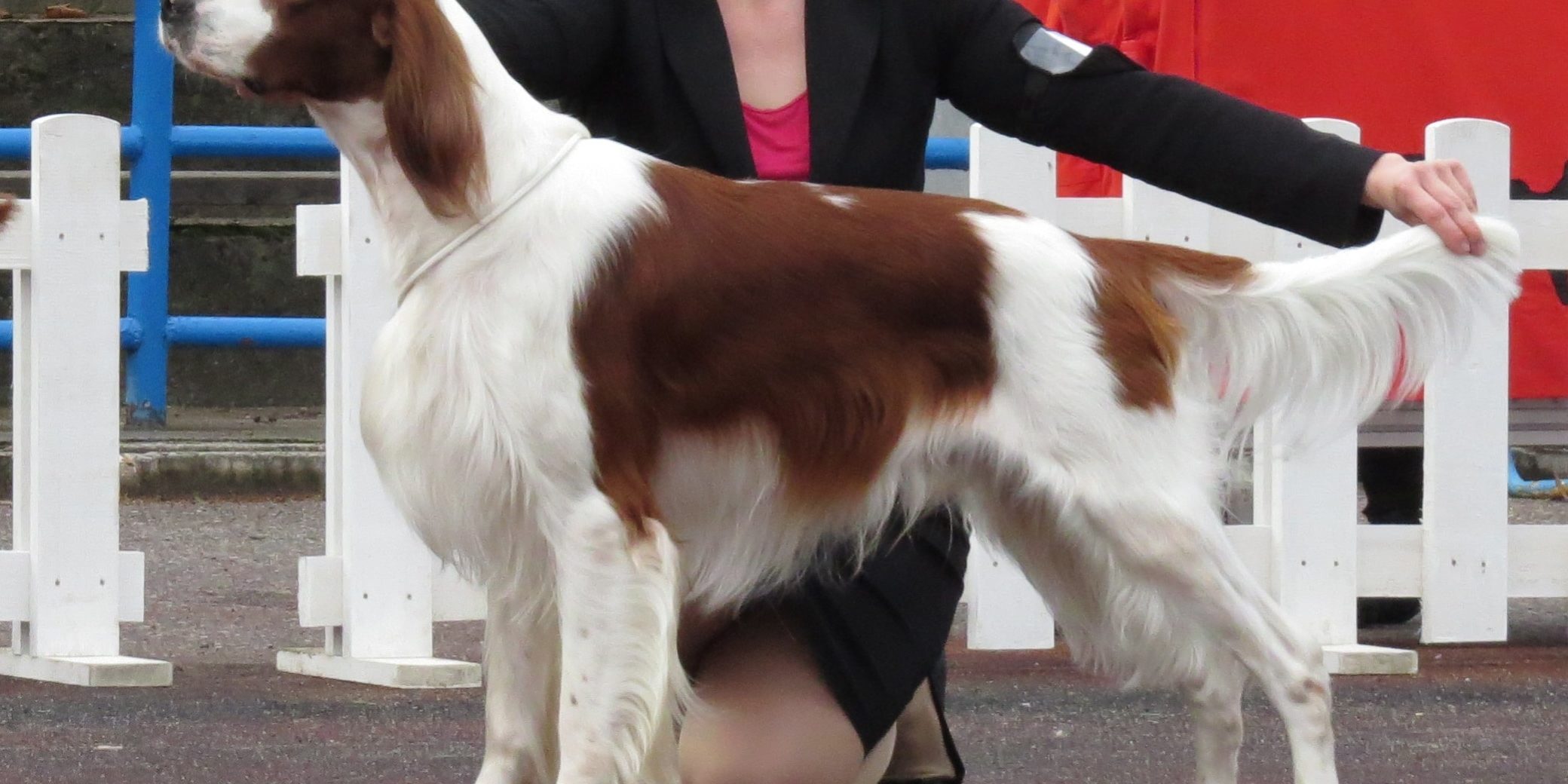 As the Irish Red and White Setter bounds through the woods with a hunter close behind it can smell the familiar scent of game birds. Finally it slowly picks up a scent from a nearby bush and instinctively points at it as the hunter creeps up behind.

The dog creeps forward until the bird breaks free from the bush with a Flap, Flap, Flap! A gunshot rings out and the dog bounds forward to grab the catch!

The owner and dog celebrate with barks, praises, and petting as they walk back to their car. The whole way the dog is pleased with the praises it gets!

This is a great even tempered dog that is good for hunters and families alike!

Hunters used Setters or “Setting doggies” to hunt game birds as far back as Roman times. In the 1600s game hunting became a popular sport and dogs such as this became sought after. Breeders standardized this dog by the 1700s. People referred to these dogs as “Setting Doggies”. Some pure l

The early setters in Ireland were mostly red. Over time breeding with other white and partially white setters led to the red and white setter we see today. People bred setters in the 1800s and commonly showed these dogs in competitions.

Breeders claim some setters in Ireland still have pure blood lines to the 1700s. Some notable families that owned these dogs were the Rossmore family, Reverend Mahon of Castlegar, Yelverton O’Keefe, Maurice Nugent O’Connor and Miss Lidwell.

The Great Irish war did not bode well for this dog. It almost became extinct. However after men returned from the war, efforts were made to bring the breed back. This effort did not bring the breed back in great numbers and they still remained rare for a long time after.

Breeders started making an effort to bring the breeds back starting in the 1970s. The Irish Kennel Club and Irish Red Setter Club worked together to restore the breed and by the end of the 1980s this breed had increasing population again. At this time people imported these dogs to the UK as show dogs. One notable breeder known as the Gormleys, helped bring the breed to prominence at shows and before long the dog was also being imported to Italy.

The Canadian Kennel Club recognized this breed in 1999. The American Kennel Club (AKC) accepted the breed in 2009. Even today this dog has low numbers and efforts are made to keep this breed growing. The UK Kennel Club lists this breed as vulnerable due to the low registration numbers.

Where did the Irish Red and White Setter Come From?

The Irish red and white setter was originated in Ireland During the 1700s but it’s ancestors date back as far as Roman times.

Breeders create the Irish red and white setter for hunting game birds. Dogs that hunt game birds very gently use their noses to find game, then they stop and get into a pointing stance. A well trained game hunting dog will then slowly advance to where they think the bird is to root them out.

Irish Red and White Setters at a Glance

The Irish Red and White Setter is a medium sized dog. When healthy these dogs are muscular and lean. They have a larger chest and stand tall and confident. They have a medium build.

This dog has longer straight hair. It’s colors are a mix or red and white with feathering along it’s front legs, tail, and stomach.

This Irish setter has ears that lay flat on it’s head with longer fur on them.

This dog is fairly easy to groom. They have a longer wavy coat. Occasional brushing will keep these dogs looking good. They do need the occasional trim when fur gets long. During shedding season they need more brushing. Especially with this dog they shed once during the year especially when transitioning to warm weather. Also brush or bath when dirty. Giving them an occasional bath will keep them clean.

Best Climate for the Irish Red and White Setter

They have a high tolerance of heat and cold.

These dogs are very eager to please and attentive to it’s owners. It’s a friendly and kind dog by nature. That makes them a great family dog. They love children in general and play with children is a great way to get exercise. They are fairly even tempered and are easy to manage as long as they get enough exercise. These are not guard dogs however because they are hunting dogs. They are not territorial in any way and love strangers.

These dogs are very attentive to it’s owner and pick up on hunting tricks very easily. They have been known to get away with behavior if allowed but in general as long as you are consistent they can be trained.

These dogs tend to get along well with other animals and pets. They get along better with pets that they were raised with but introducing a new pet into the house is possible with this dog.

The Irish Red and White Setter is a fairly even-tempered and friendly dog, making it a wonderful family pet, especially for active families that spend a great deal of time outdoors. They love playing with children and are energetic enough to keep them active. These dogs are not guard dogs however and do not get territorial. If you are looking for a family dog that also is protective there are other breeds that might work better for your family

These dogs do have a prey drive but since they are pointers they don’t chase prey to kill but want to point and find prey.

These dogs love being around and pleasing people. They are very social with anyone they can be. A stranger rummaging through your stuff will be warmly greeted by this dog!

Is The Irish Red and White Setter Good for New Owners?

The Irish red and white setter is good for new owners. They are the type of breed that is very friendly and loyal to his owner and family. They may be stubborn but they are smart and alert to their surroundings that makes them highly trainable. Irish Red and White Setter puppies will surely win over new owners on sight!

This type of breed is healthy in general if kept exercised and lean. This breed has been bred since the 1700s and can exhibit some issues from it’s bloodline.

Some common health issues this breed can exibit are the following:

The Irish red and white setter needs daily exercise. They love to hunt and point at prey. They can also be taken on long walks or runs. Daily visits to the dog park will also keep this dog happy and healthy!

The Irish Red and While Setter Association of America is a good resource. You may also want to try this open Facebook Group dedicated to rescue of these dogs.