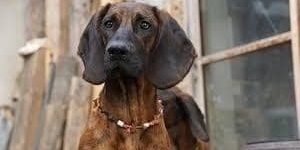 With a single drop of blood the Hanoverian Scenthound can track wounded game for miles! Very early Germanic tribes used this dog to hunt. With the advent of firearms this dog became more popular among hunters. With it’s broad chest it can run after game for many miles or kilometers. It’s only a matter of time before it catches it’s prey!

Hanoverian Scenthound originally came from Germany. People knew this dog as the Liam Hound in the Middle Ages. This dog played a very big part in the establishment of Germanic tribes around 500 AD.

Breeders created the Liam Scenthound when firearms were created and hunting practices changed.

The Kingdom of Hanover took an interest in the breed in the early 1800s and worked to preserve the breed and handling methods and this breed developed into what is know as the Hannoversche Schweißhund which is also known as the Hanoverian Scenthound.

The breed club Verein Hirschmann e.V took over caring for the breed and preserving it’s working heritage in 1894. Since then the club has focused on keeping the breed true to their working ability.

Where did the Hanoverian Scenthound Come From?

This breed originated in the 17th century in Germany.

This dog breed was bred originally to hunt prey, however once firearms were invented the need for dogs that can track wounded prey made this a popular dog breed. Once hunters shot game this dog was excellent at tracking down animals from a single droplet of blood on the ground. These dogs have been bred true to their ability and continue to be used primarily for hunting.

Hanoverian Scenthounds at a Glance

This breed is medium-sized with a red, short coat. This dog also has a long snout used for it’s great sense of smell, and long floppy ears. This dog is lean with a large chest which helps it breath deep while chasing game on what can be long hunts. It’s capable of strenuous exercise.

The Hanoverian Scenthound is very easy to groom. They should only be bathed when very dirty. They do not require regular brushing but still shed in the fall and spring.

Take special care of this dogs ears to make sure they are free of infection or irritation and don’t forget to clip your dogs nails regularly!

Slightly. All dogs drool some, however they do drool somewhat more when hot.

Best Climate for the Hanoverian Scenthound

This breed can adapt to either cold or warm weather but because of it’s short hair cannot tolerate extremely cold climates.

The Hanover Hound is a calm, loyal, and gentle breed by nature, though it can be a little distant around strangers. When socialized an early age, this breed can be kid-friendly, however, due to their ability to hunt, they still love to chase other small animals. Hanover Hound is not a good watchdog, but still, they will bark if they sense something bad

Introducing a Hound to other animals can be difficult when older. Regardless of their difficulty they can be trained but it takes time, and patience. Socializing at an early age with other animals is always possible.

These dogs are calm and loyal. However it’s recommended these dogs are only part of families that enjoy hunting where they get lots of stimulation.

The Hanoverian Hound has a very high prey drive instinct. It is already in nature to them to chase other small animals, but it doesn’t mean they are aggressive.

This breed is sociable, they enjoy having someone by their side.

Is The Hanoverian Scenthound Good for New Owners?

This breed not recommended for new owners due to their headstrong personality and independence. These dogs are primarily used for hunting. If you are an avid hunter this could be the dog for you!

As a working dog, they are known as the hardest and healthiest breed. However, as the time comes, when old they also experience some natural health issues such as hip dysplasia, obesity, bloat, ear infection, and cancer.

These dogs do not have any breed specific issues. They can live a long life for a medium size dog and if you work with your vet to keep you dog healthy they can live up to 14 years!

They are very active and have high energy. This breed needs to be with people that have active lifestyles.

These dogs are hard to come by. They rarely have the need for rescuing. However there are several resources to find these dogs:

For the USA a great place to start looking for this breed is the Hanoverian Scenthound Club of America. Another resource is the following website: