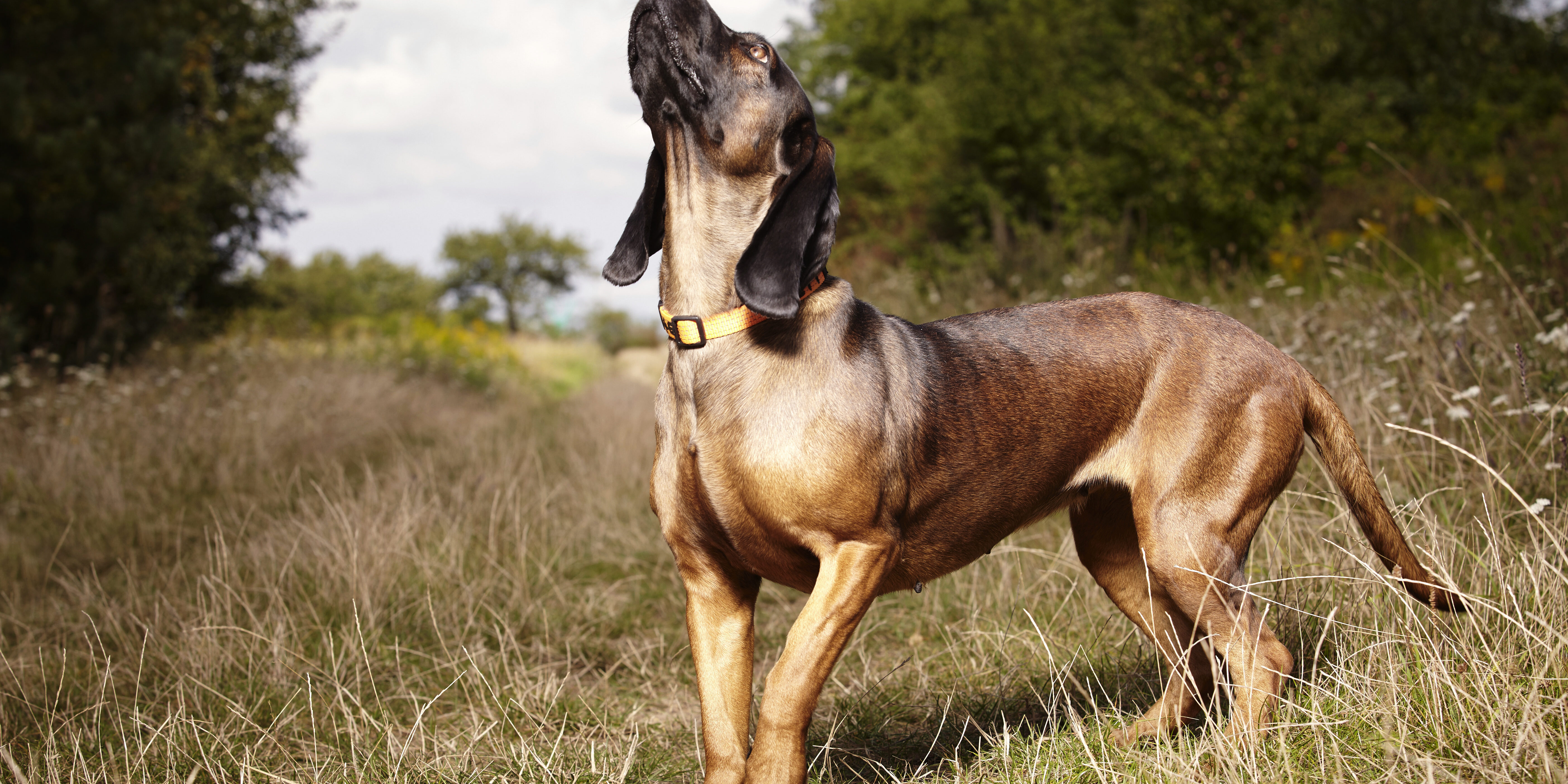 Breeders developed the Bavarian Mountain Scenthound in Germany. These hounds are obedient, cool and confident.

These dogs are different than other scent-hounds in that they are able to distinguish between the prey they are looking for and other prey in a very distinct way.

They are most likely wary and shy at first but overall they are highly good in socialization and a good asset on the household.

This dog descended from some of the finest scent hunting dogs from the 1800s. This dog is a cross between the Bavarian Hound and the Hanover Hound. Hunters bred this dog to be smaller than that Hanover Hound and more able to track in the upper elevations. Gamekeepers and hunters used this dog as a trail and hunting dog over the years because of its outstanding and strong trait in tracking.

People referred to this dogs original hunting dogs ancestors as German Bracken. They have a strongly developed nose used to follow scents and trails. Breeders used only the most reliable dogs in this line of scenthound. From these early dogs breeders developed the following dog breeds:

Around the turn of the of the Nineteenth the Hanoverian Scenthound was the breed of choice by hunters in lower elevations. A need arose for a dog that could track down injured game in the more mountainous regions after the Revolution of 1848 and with advancements in hunting and firearms. The advancements meant shooting farther. Tracking game after they are shot is called “after the shot”.

Breeders established the Club for Bavarian Mountain Scenthounds In 1912. It was established in Munich, Germany and is the only recognized club for the breed in that country.

Today, these dogs are the quintessential hunting companion for professional hunters and gamekeepers. Though still rare, there is growing interest in this breed, with clubs in multiple countries including Great Britain and the United States, as well as Germany.

Where did the Bavarian Mountain Scenthound Come From?

This dogs are bred to do the hunting but most specifically on tracking. Bavarian Mountain Scenthound has an unusual tracking ability. It easily tracks the wounded by detecting small amounts of blood and can decipher between the prey it’s looking for and other prey very well!. This ability was a great help back then for hunters.

Hunters needed this breed to fill the need for a lighter, more agile hound for hunting at higher elevations.

Bavarian Mountain Scenthounds at a Glance

This type of bread are compact and muscular. This dog has a thick chest and shorter legs. It’s ears hang down. and it has a long thin tail. Its nose is always black or dark red and its nostrils are wide. This helps them track easier.

This dog is typically brown in color and has a shorter coat.

The Bavarian Mountain dog does need weekly grooming. They have a short tight coat but they shed a lot. During shedding season they may need more brushing. Giving them the occassional bath will keep them clean.

Bavarian Mountain Scenthound handles most climates either heat or cold.

Just because these dogs are bred for hunting and tracking does not mean they can’t be a good companion.

Once they pick their “special person” where they get very attached to, they are affectionate and loyal. It is commonly seen that this breed experiences separation anxiety.

This breed of dogs are extremely trainable. They have a strong instinct to chase. Training them on to do this can be difficult. However if they are used for hunting they take to that training very readily. They need a lot of mental and physical stimulation as they tend to easily become unhappy and bored. Trainers highly recommend training early.

This breed is sociable at times but due to their high prey drive and instincts they usually ended up chasing them. That is why training is required.

Bavarian Mountain Scenthound are kid-friendly dogs. They are active, intelligent and very good with socialization. Though they tend to be a one person dog especially to the person who trains them, they are still friendly towards other family members they know. They are even recommended for the elderly. Nonetheless, if we talk about security, you don’t have to worry as this dogs are absolutely a kin into security.

They chase after any animal as they have high prey drive. But when this breed are trained early, their behavior are well adjusted.

5 – The Bavarian Mountain Scenthound are moderately good at strangers. They are cautious and shy at first. They need more socialization to acquire such need.

Is The Bavarian Mountain Scenthound Good for New Owners?

This type of breed are not suitable for novice or first time owners. their stubborness are best with experienced owners.

Bavarian Mountain Hounds are quite healthy but like all dogs, they are prone to certain health issues than any other breeds.

The Bavarian Mountain Hound has an average lifespan of about 10-14 years.

Dysplasia, eye problems, ear infection and epilepsy. These are the common health issues the Bavarian Mountain Scenthound experience. It is important to check on them regularly as they are good in hiding their illness.

This dog needs at least 2 hours or more of exercise daily. They become destructive when physical stimulation are not met.