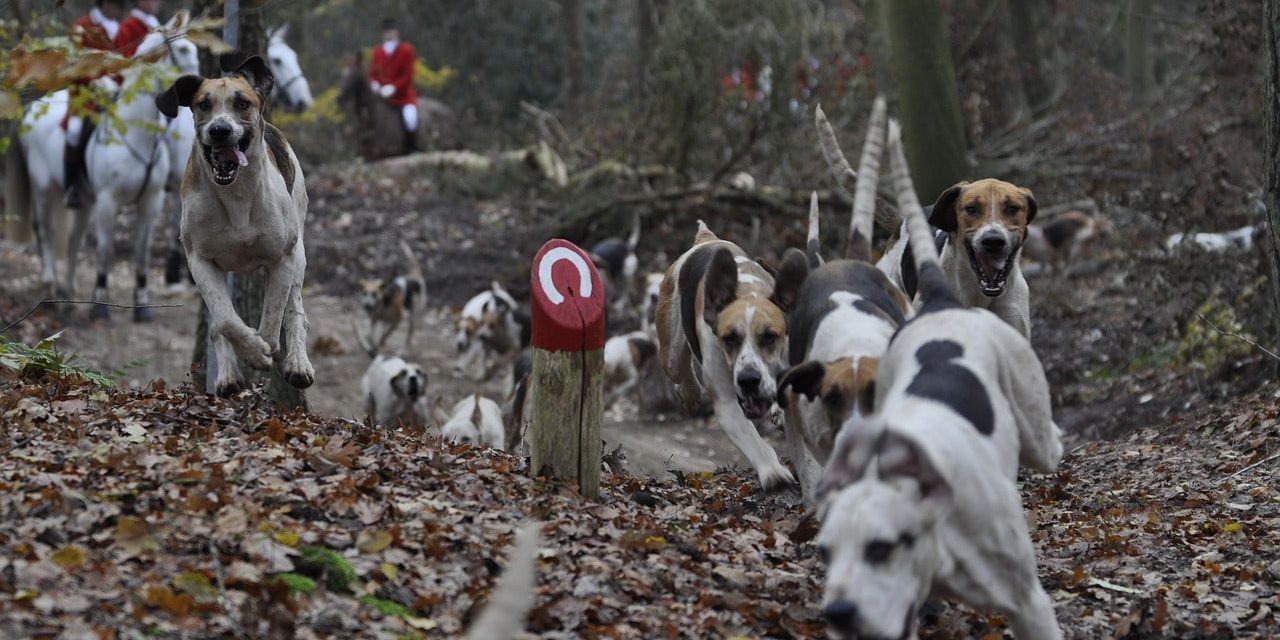 It’s dawn, and the American English Coonhound trots through the underbrush with it’s head low trying to pick up a scent. It’s quite except for the occasional crack of sticks or chirp from a bird.

This dogs interest peaks as it puts its head into a nearby bush, then with utter excitement it takes off running hot on the trail of a racoon! It’s owner bounds close behind making sure not to miss the prey they are tracking!

This dogs history starts in the early 1600s when immigrants brought over English Fox Hounds to the United States from England. Fox hunting was a favorite pastime until the American Revolution. During the Revolution English Foxhounds were not brought to the united states and the gene pool dwindled for the ancestors of the American English Coonhound. In the early 1800s moor hounds were imported into the United States and the gene pool was refreshed.

Backwoods Breeders created dogs that could hunt foxes by day and raccoons by night. Over time the breed was refined. Other names for this breed at the time were Redtick Coonhound and the English Coonhound.

Where did the American English Coonhound Come From?

The American English Coonhound Originated at United States by European settlers during the 17th and 18th centuries. This breed was first called as Virginia Hound named by by Robert Brooke, Thomas Walker and George Washington.

Backwoods Breeders created dogs that could hunt foxes by day and raccoons by night. Over time the breed was refined to hunt raccoons. These type of dogs were used to hunt raccoons and the American Red Fox. It also used to hunt opossums, cougars, deer, boars, bobcats and bears during the old times. Today the American English Coonhound continues to hunt, often in very large packs and typically after fresh trails.

American English Coonhounds at a Glance

The American English Coonhound has a muscular body and a broad chest. They have a long snout and long droopy ears. These dogs have a great sense of smell. It has a broad head with a domed skull.

They are a medium sized dog. They have a short coat and slender legs. Their coat colors can vary greatly as Bluetick, Red and White, Redtick, Lemond and White, Ticked with tricolor, and Black and white

The American English Coonhound is fairly easy to groom. They have a short tight coat which resists dirt. Occassional brushing will keep these dogs looking good. During shedding season they may need more brushing. Also brush or bath when dirty. Giving them an occassional bath will keep them clean.

This type of dog can tolerate heat and cold but mostly they love in cold places.

The American English Coonhound is primarily a working dog and has been bred for its hunting abilities above all else They have an exceptionally high prey drive. they are known for having a one-track mind, pursuing their prey doggedly and ignoring everything else around them, including their master. Despite of those facts they also have a chance to adapt as a family pet and can be a good companion of children.

The American English Coonhound can have a tendency towards being dominant, both among other dogs and among people. They should be taught their position in the family from an early age and should receive consistent signals from all family members.

3-This breed has a high prey drive and they have their chances to pursuing their prey doggedly and ignoring everything else around the.

The American English Coonhound can adapt a life of having a human families. They are sociable with both people and other dogs and bond strongly with their family, devoting themselves to those they love.

The American Coon Hound has a fairly strong prey drive. It’s best to keep them on a leash when in public places. They will give chase to small animals.

These dogs are social with other people. They enjoy action and crowds.

Is The American English Coonhound Good for New Owners?

This breed can be stubborn when it chooses. Firm training is essential to ensure that they follow all commands given to them and not just the ones that they like doing. so average new owner might not be good for them

The are generally a healthy dog. Keep them healthy by keeping them very active and feeding them high quality dog food.

This dog might experience some health issues like overheating, Lysosomal storage diseases, bloat, Hip and Elbow dysplasia and ear infection. Responsible Breeders will take care to make sure this dog is checked for the following issues:

These dogs are very active and were bred to chase. They need a very active lifestyle and are better used as hunting dogs to get the exercise they need. These dogs would also be good for hiking, running, or other vigorous exercise.

Here is a pretty good resource for finding rescues in the USA.